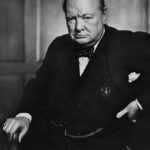 Oldman, 59, one of Britain’s most versatile actors, said he was initially hesitant to take the role given the larger-than-life character and the great actors who have already portrayed Churchill, including Albert Finney, Richard Burton and Robert Hardy.

The film, by “Atonement” director Joe Wright, will be released in theaters in the United States on Nov. 22.

After a long career in politics, Churchill was thrust into the prime minister’s role following the resignation of Neville Chamberlain in 1940.

The historian and prolific writer had already sounded the alarm on Adolf Hitler years earlier. As prime minister, he refused an armistice with Germany and famously said, “we shall never surrender.”

Oldman, who is almost unrecognizable in his role wearing heavy prosthetics to transform into Churchill, said the prime minister’s historical knowledge helped prepare him to lead Britain: he was able to see a pattern and believed Europe was in an era between wars.

“Maybe we’re seeing that pattern again. Maybe we have been in-between and something is coming,” Oldman told reporters at a press conference.

“Maybe that’s the zeitgeist, what’s in the air, that makes someone like Churchill become current and popular,” he added.

Kristin Scott Thomas, who plays Churchill’s wife, Clementine, added that as a character, Churchill offers hope and faith in “someone showing up.”

“I think what (the film) tells us about leadership is that … leaders are human and they have faults,” she said.

“What is extraordinary about Winston Churchill is that he was an historian … and was able to sort-of foresee certain things that, you know – and that is what made him an extraordinary leader,” she added.