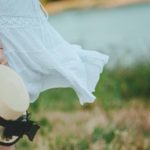 Labor Day marks the traditional end of summer, and according to one rule of fashion, the time when stylish people should put away their white clothing until the following Memorial Day. As with many such old-fashioned traditions, there’s some disagreement about why white was banned after Labor Day. While we’re unlikely to find a hard-and-fast answer about the rule’s origin, one thing is certain—nowadays few feel bound to abide by it.

Depending on who you consult, the restriction of white clothing to the summer months had either to do with practicality or class. In the years before air conditioning was invented or came into widespread use, wearing lighter-colored clothing was a sensible way to try to stay cooler when the temperature rose. Even through the first half of the twentieth century, acceptable summer attire covered much more of the body than today, so reducing the heat-retaining properties of your clothing would make a noticeable difference in your comfort.

However, this isn’t the whole story. White clothing was also something of a status symbol in the late nineteenth and early twentieth centuries, when this rule began to gain prominence. Working-class people tended to wear dark clothing year-round, because it hid dirt better. White clothes were therefore associated with people who had the financial means and the leisure to go on vacation. At the same time, society was more stratified than it is today, with wealthy established families looking unfavorably on those who had more recently attained the means to hobnob with the elite. Tradition says that upper-class women adopted this fashion rule, among others, to distinguish themselves from the gauche newcomers.

Regardless of why the rule first cropped up, by the middle of the twentieth century it was established wisdom, filtered down to the general American population by way of women’s magazines and other arbiters of taste. It also met resistance almost from the start. For example, Coco Chanel refused to follow it, making white part of her wardrobe year-round from the 1920s on. Other style icons have worn white out of season both on notable occasions and as a matter of course.

Nowadays, the rule seems to have few defenders, with style magazines and even etiquette sites noting that white can quite reasonably be worn outside of the traditional summer season. After all, heat waves do not politely confine themselves to June, July, and August. Even when the weather is cooler, a white sweater or jacket may be just the piece to transform an ensemble from nothing special to head-turning. While you might want to leave all-white attire for the height of summer, adding white to your wardrobe in any season is established practice among the style-conscious.

Of course, if there is one general guideline to fashion it’s this: you can get away with breaking any rule as long as you do so with sufficient style. Ultimately any choice you make about when to wear white is up to you, just do it with flair!